With Jan/Taffy during her last Christmas season.

A friend recently noted on Facebook that many of us who no longer have our mothers feel as though we are unmoored.

I occasionally have that feeling—but then I remember that my mother is still with me in many ways.

On Friday, I visited my friends at Mass Appeal, the lifestyle program on which I cook from time to time. The young hosts were celebrating Mother’s Day; their mothers were also guests that day and were deservedly feted. (They have raised pretty terrific children.)

For a moment or two I felt a little sorry for myself. I had no mother, I thought, and I was no one’s mother.

Co-host Seth Stutman snapped me right out of that little bout of self-pity. As a tribute to my mother I prepared a salad that featured one of her favorite foods, rhubarb. While Seth and Lauren Zenzie tossed the salad for me I shared the words on my mother’s gravestone.

Her epitaph was inspired by an incident that took place shortly after I graduated from Mount Holyoke. I returned to campus and as an adult (finally!) was invited to the college’s weekly faculty cocktail hour. There I met a retired philosophy professor named Roger Holmes.

“I believe my mother took a course from you many years ago,” I told him. “I don’t know whether you’d remember her: Jan Hallett, Class of 1939.”

The elderly but spry man immediately replied, “Short and full of life!”

Obviously, my mother made an impression. When she died my brother and I decided to inscribe Professor Holmes’s description of our petite, lively mother on her grave.

When Seth heard the epitaph during our cooking segment, he stated, “Well, Tinky, I’d say the same thing about you,” and gave me a big Mother’s Day hug.

He went on to note that he thought of me as one of his “show moms.”

Since I’m officially only 39 and Seth is 31, I replied that I and his other show moms (studio manager Denise and director Deb) thought of ourselves as older sisters rather than mothers.

Nevertheless, I was touched and reassured.

My mother may no longer be walking around the house, but she is present to me—not only in my own small stature, but also in every dish I cook and every song I sing. She will always be with me.

And I may not be a mother, but I am an older woman friend to lots of children (and even a few grownups like Seth!) whom I can nurture and love.

I seldom quote the Bible, but in this case I have to agree with the “Song of Solomon”: “For love is strong as death.” I also concur with lyricist Leo Robin: “Hooray for love!”

Happy Mother’s Day to all.

If you’d like to see the segment (the salad was DELICIOUS!), here it is: 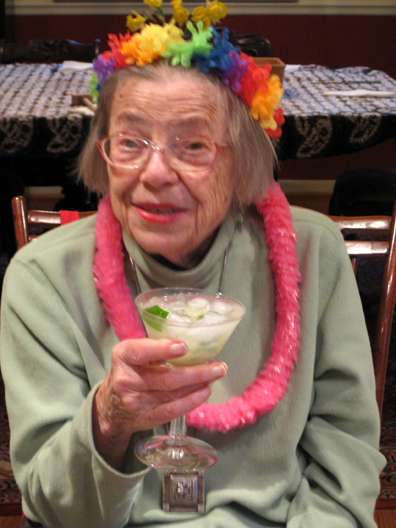 My mother Jan enjoyed raising a glass at festive occasions.

In my family we tend to divide up the sad part of commemorating a death from the joyful part.

A few weeks after my mother Jan’s death in December we held a brief memorial service at our church. A number of people offered to speak at the service. My brother and limited the program, however. We wanted to give everyone—and most of all ourselves—a chance to say a dignified goodbye so that we could move on to grieving, to adjusting to life without her, before talking too much.

That was the sad portion of our official mourning—or perhaps I should say the sadder portion. No one could be very sad when thinking about my funny, happy mother. And saying goodbye to a 93 year old is a lot less tragic than saying goodbye to a 33 year old or a 63 year old, even if everyone DID expect her to live to be 100.

The official joyful part of our mourning will come in just under two weeks, on Saturday, July 7, at 12:30 in the afternoon. We are giving a pot-luck memorial party. (Some of our neighbors are calling the event Jan Day.)

My mother wasn’t Jewish, but she approved of the Jewish tradition of burying someone within 24 hours, having a little quiet family time, and then waiting until the unveiling of the grave a year later to remember the dead extensively.

We’re only six months out now—and we won’t be unveiling a tombstone at the party because Jan’s daughter keeps forgetting to order one. (I’m sure Freud would have something to say about that.)

We do have enough distance from her death, however, to enable us to laugh a lot more than we cry at the party.

People keep asking me about our plans for the party.

WE HAVE NO PLANS.

So that’s our plan … if you can call it a plan. We’ll have wine and soda and maybe rhubarb tea … and a little bourbon and gin and tonic to appease the relatives who consider those a must at a party (as did my mother)…

And tea sandwiches and tandoori chicken and ice cream sundaes and whatever people bring to the feast.

We’ll tell funny stories and sing songs she adored in her youth. I’m looking for the music to “I Get Along Without You Very Well.” She frequently told me that she sang this song constantly for a month—with great bravado—in 1940 or so when a boy named Dean Woodruff dumped her. (She was usually the dumper rather than the dumpee so his defection made her feel particularly melodramatic.)

Mostly we’ll enjoy our lovely Hawley hills and each other’s company, particularly the company of her two surviving siblings, even if her baby sister does drive us all a little crazy. (That’s who my aunt is, and we love her.)

We still laugh when we remember my neighbor Florette’s drunken speech at my father’s memorial party. I THINK it was about men with whom she had had affairs at different points in his life, but it was a bit incoherent. Another neighbor finally grabbed Florette and pulled her out of the spotlight.

And we fondly recall my cousin Pat’s speculation that my father was participating in the festivities in the form of a particularly busy butterfly. (I didn’t entirely buy this story—my father was a little too noisy to come back as a butterfly, in my opinion—but it was a lovely thought.)

And we’ll find satisfaction in knowing that life goes on, richer because of the objects, the foods, and especially the people my mother loved.